This post hopefully needs no introduction. I am here to write a small essay on why I believe climate striking is most definitely NOT just for adults. Let’s start with a bit of history. In 1963 Martin Luther King Jr. led a march on Washington for jobs and freedom, in 1913 there was a Women’s Suffrage Parade, The Abolitionist Movement in the 1800’s, the March on Washington for LGBT rights and liberation in 1993. All of these historical movements made history and helped change social values by creating awareness. They all involved active demonstrations, protests or other forms of physical movement. In other words, they did not stand still. We are now living in a time where one of the greatest threats to our way of life is from our climate. The climate is changing at a rapid rate and with scientific backing and while public pressure continues, governments and politicians still remain polarized and passive.

Tomorrow is the 20th of September 2019 and it will be the day of the Global Climate Strike, an initiative led by a 16 year old Swedish environmental activist Greta Thunberg. An activist who is 16 years of age. More than 100 protests have been planned to take place across Australia because as the saying goes actions speak louder than words. That leads me to the point this blog post is here to make, actions do speak louder than words Gladys Berejiklian. Yes the premier of NSW is heavily against the climate strike and is urging parents not to take their children out of school as she claims the educational value in school trumps the strike. While I respect Gladys Berejiklian and her opinion, I disagree.  In her eyes, the best form of action is engaging in class discussion as she referred to on ABC’s Q & A program. “I encourage protest, but on school grounds”. Glady’s while I appreciate your efforts to support change, your political party has shown it has little interest in affecting real change on this issue. It is already a difficult-enough time attempting to get this message across to parliament and have them act on it. The idea of a strike is to bring solidarity and togetherness, because there is strength in numbers. A discussion at school would be great any other day, but not today. It is the act of protesting in the streets instead of fulfilling your everyday routine, which shows the frustration we have with the passive inanition by parliament! Thankfully, Senator Kristina Keneally, raised her support for the movement on the panel stating that “there are things worth fighting for and if you truely believe in fighting for it, you need to make your voice heard.” Although, her words were just that, since her political party also has recently proven its selective nature when it comes to the climate, demonstrated through the approval of the Adani Coal Mine.

The fact of the matter is – age should not be a barrier for protest. We are fortunate that Australia’s constitution provides indirect protection for protesting through the implied freedom to political communication. We also have the right to freedom of peaceful assembly. These rights do not discriminate on the basis of age. This is our future. The youth are the individuals who will be responsible for this planet in a few decades politically, but if translations are not made NOW then what future is there to govern over. Irreversible damage is already becoming a reality with thousands of species feeling the real effects of climate change and dozens on the brink of extinction today due to the repercussions of our complacency and inaction over the past decade. That is why activism is so important for young people. Standing up for what you believe in creates change and we have made it quite clear that the changes we want to see revolve around renewables and transitions to sustainable developments and enterprises. For these large scale changes to occur, legislation must be enacted! So, why should young people not protest for these changes if they are not occurring, when it is clear that a large and vocal majority support necessary action and change.

Recently, I came across a post on facebook advertising a local climate strike for the School Strike 4 Climate movement. Unfortunately, I was disappointed but ultimately not surprised by the numerous responses from older generations voicing disapproval for the strike and protests. As someone who resides in a relatively rural area this did not startle me and I would definitely consider my local community sheltered in some regard (as some significantly strong ties to traditionalist views on social issues still exist in the high elderly population of my geographical locale). Anyway, I took a screenshot of some of the responses and for privacy reasons have blurred the names but I thought it was important to discuss and showcase them.

Yes, this was an old white man in case you were wondering and yes he was being completely serious! I mean, I think the lack of vocabulary, correct spelling and punctuation demonstrates how educated he is on this matter.

Why should they not be exposed? In fact I would say compared to what kids are exposed to these days through mass media and on electronic devices, a climate strike is relatively calm? How is the climate ‘adult stuff’ when it affects every individual on this planet. Schools are not using kids for anything. Schools are not organising these protests – young people are! Kids are taught in school to ‘be the change they want to see in the world’ and to ‘stand up for what they believe in?’ Are you now going to tell kids that there are actually restrictions on what they should stand up for and how they should and should not protest that, when our planet is at stake? 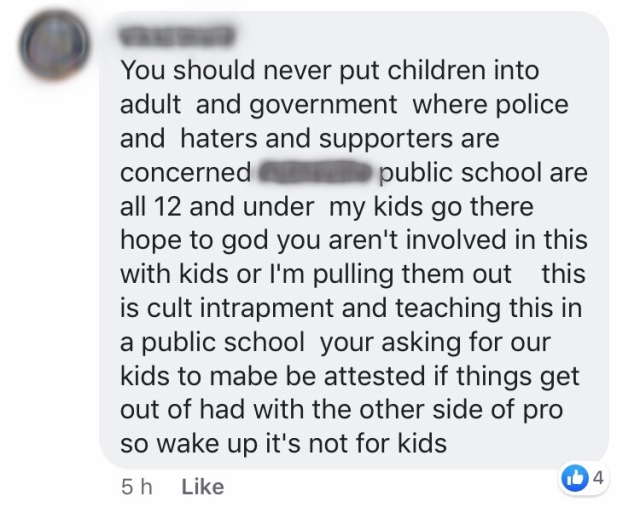 “Cult entrapment.” That is a complete misrepresentation of what these protests are. They are peaceful protests and aim to spread awareness, gain government attention and provide a platform for younger voices to be heard on this issue. Pulling ones kids out of a school is going to do more harm than one day off of school for a climate protest would do.

May I remind the general public that while many adults seem to brand this issue under the ‘political’ subheading, it has a more appropriate positioning under the category of ‘social.’ This is a social issue that effects all societies on the planet, regardless of their geographical proximity, beliefs, nationality etc. Yes, maybe it is also a political issue but that is exactly why people are protesting and lobbying government for action, because without political and legal advances, physical change and implementation can not truely occur. One day out of school for a cause such as climate change is more learning experience than a week of school would provide for them. Learning to be an aware and active citizen at a young age is so vital and this kind of protest is a prime example of education through action. The issue affects us all which means the right to protest for it should be extended and given to all who choose to participate, irrespective of their age!

If you would like to find out more about the School Strike 4 Climate head to;

What are you looking for?